A Closer Look At Pino

Giuseppi Dangelico Daeni is better known as Pino Daeni, or simply Pino. He was a romance industry icon who created over 3,000 book covers in about 15 years. He spent almost the last twenty years of his life working as a fine artist of great acclaim.

Pino’s childhood visual memories consisted of females left behind to keep the home fires burning. His mother, aunts, grandmothers, and cousins became a universe of attractive women in aprons. Throughout the uncertain times of World War II, they maintained domestic tranquility. Pino would always cherish the feminine ideal. That appreciation shone through his paintings.

Pino created portraits that celebrated the beauty of women, children, and families. A talent in the tradition of his Italian forebears, Pino’s artwork was a bridge between classical romanticism and contemporary realism.

Pino was born in Bari, Italy, on November 8, 1939, to a large family with numerous children.

His first-grade teacher recognized his talents and advised his father to encourage Pino’s gifts. His father was initially skeptical of this recommendation but changed his mind when he saw his son’s artwork.

“When I was eight, my older brother would have to draw for school. My father would wake me up after preparing all the colored pencils, and tell me to draw a boat with a fisherman and a sunset or some other scene.”

Throughout his early years, Pino would sketch in his school books. His older brothers and soccer teammates offered him 30 lire per drawing to help them with their high school design projects. Pino relished the earned income by doing something he loved.

He enrolled at the Art Institute of Bari in his late teens. At 21, armed with nothing but a few pencils, Pino left home to study at Milan’s Academy of Brera. There, he honed his skills by painting live nudes.

Soon Pino was drawing historical scenes for textbooks. Later he joined the staff of Fabbri, an established publishing firm where he illustrated history books and women’s magazines.

When Pino’s father died suddenly at 52, he moved his mother and five siblings to Milan. Pino was the sole supporter until his family could provide for themselves.

Later that year, his contract with Fabbri expired. The enterprising artist made his first trip to the United States on a visitor’s visa. He spent three unsuccessful months in New York seeking a sponsor and employment. Upon his return to Milan, Pino and Chiara had their second child, Massimo.

From 1960 to 1979, his work was prominently displayed throughout Italy and Europe. He won several prizes and awards, and commissions to illustrate books for Italy’s largest publishers, Mondadori and Rizzoli.

Pino dreamed of being free of art directors and account executives. Their demands to paint their ideas rather than his own was a constant drain on his creative energy.

He had grand ambitions, but familial responsibilities forced him to seek commercial work in a field where publishers were more interested in consistency than originality. His use of subliminal devices, color, composition, and detail, pushed the envelope.

Pino had grown up with faded glories of renaissance art and architecture in Italy. He was also in tune with the energies of the new era. Despite his phenomenal success as one of the leading European illustrators of all time, Pino wanted to be closer to the dynamic art center of the world, New York. He also wanted to release his art from the restrictions of others and be free to explore new avenues that had been opened by the abstract expressionists of the late 1940s and early 1950s.

An Italian Comes to America

After visiting Manhattan and experiencing the freedom of the art scene there, Pino became acutely aware of the restrictions in Milan. The New York museums opened his eyes to America’s rich history of figure painting.

In 1978, Pino moved his family to New York. He was eager to partake in significant opportunities within a more unrestrictive environment. Although he had achieved acclaim in Europe, he was an unknown in American circles. Pino spoke in broken English and owned only a bicycle for transportation. He had to take what jobs came his way.

“I needed $325 to pay the rent, so I went door to door to Manhattan galleries trying to sell some paintings. I stumbled upon a gallery with an Italian name and in broken English, asked if they work with Italian artists. The owner said he did but only offered $300 for the painting. So I left and walked 50 more blocks without success until I turned around and went back to him. By then, the owner offered to pay only $250. I took it.”

Eventually, Pino was sponsored by the Borghi Gallery, which held several New York and Massachusetts shows.

Pino knew New York was not only the center of fine art but also the world publishing capital. It was where big deals were made and new concepts and original styles rewarded.

Accompanied by a friend as a translator, Pino began knocking on doors of America’s top publishers. In 1980 he would receive his big break as a cover artist.

Zebra books were the first to hire him. His covers were distinct from the usual clinches, as they would display a heroine in a solo pose with the couple embracing beneath. The success of his first covers for Zebra soon had Dell, Simon & Schuster, Bantam, Harlequin, Penguin eagerly seeking his distinctive style. That style would dominate the market and exert a profound influence on other artists’ work from 1980 to 1995.

Pino was the highest-paid illustrator in America during this period, with over 3,000 book covers, movie posters, and magazine illustrations to his credit.

Here is an early cover for a Danielle Steel:

Like Harry Bennett, Pino was one of the first artists to use a style of illustrating called the “wraparound.” He would paint a continued image around the cover that left space on the back for the description and the front for the title.

My Opinion Of Pino

“An art director might say, ‘Pino, we need a mansion.’ We talk about the period, the mood. I try to put myself in the male’s shoes. It’s very easy for me. I’m good because I’m a romantic.”

I often hear readers of the romance genre comment on how cover art has improved over the years. Many say that modern covers are more mature and artistic. Frankly, I can’t help but wonder if people see reality through distinct lenses because my eyes don’t view it that way.

But for every master artist like the ones mentioned, dozens of Adobe Illustrator users create weird-looking or oversexualized covers. Some people complain the old clinch covers were embarrassing. I find the headless torso covers of men with eight-pack abs far more egregious. There’s little appreciation for fine art in the age of the Kindles and iPhones.

The majority of covers today look crisp, overproduced, and impersonal. Unless an artist’s style is incredibly distinct, it isn’t easy to deduce which covers are made by whom. Pino’s brushstrokes, the curves of his feminine subjects, and facial expressions are uniquely recognizable.

He was as talented as any of the old greats: da Vinci, Botticelli, Raphael, or Titian. Romance aficionados should be honored such an artist is part of its history.

In 1992, the strain of tight deadlines became too much for Pino. He was ready to leave the world of illustration behind and return to his impressionist painting roots. After contacting a highly regarded gallery in Scottsdale, Arizona, he was encouraged to send several paintings, which were well received. His illustrations appeared in Hilton Head Island, SC, and Garden City, Long Island, NY. Pino made several appearances on major TV networks and was interviewed in national and international journals.

As digital artwork became more widespread, Pino’s cover art output slowed down significantly. A classic at heart, he deplored the sterility of computer-generated images. By 1994, Pino was no longer just a book illustrator, but a professional painter. He would spend the rest of his life living his dream as a world-renowned fine artist.

In 2001, Max, Pino’s son, began representing his father, despite his father’s initial reluctance. Max successfully grew his efforts into a profitable marketing company, helping his father expand beyond his regular gallery representation to include magazines, books, and limited edition fine art prints.

“Rockwell bridged the gap between illustration and fine art, and Pino did the same.”

From the time he could first hold a pencil until his very last days, Pino remained an exemplary artist. He worked tirelessly with prodigious output.

Pino worked in oils and preferred to stand while painting. After being diagnosed with cancer and enduring 18 months of grueling chemotherapy treatments, the artist no longer had the strength to stand for long periods of time. Instead, he would rest on the couch to draw and paint with watercolors.

“His career had come full circle. As a young boy he dabbled in watercolors, switched to oils at 18 and never went back until he became sick with cancer. Amazing how life works like that.”

He is survived by his family, including his son Max and his nephew Vittorio Dangelico, aka Vidan. Vidan was also a romance cover illustrator and is now a fine artist in a style after his uncle.

His work appears in art galleries worldwide, and his giclee prints sell into the thousands of dollars.

Through his art, the memory of Pino lives forever. Pino proved that commercial artwork need not be derivative and sterile but beautiful and worthy of admiration. While, unfortunately, some people still harbor shame or express mockery for romance covers, Pino was one of the influential artists who elevated them to true artistry.

More than a mere illustrator, Pino is celebrated as a master painter of the 20th century. 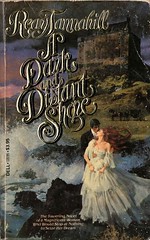