The Coach to Hell was a bit of disappointment for me after reading Rachel Cosgrove Payes’ Moment of Desire. While that book had a heroine who was placed in awful situations yet tried to make the best of them while always knowing her mind, this book’s heroine is a wishy-washy sort that just goes with the flow because that’s what toilet paper does.

The Coach to Hell is a paranormal/Gothic/bodice ripper romance that features a beautiful, orphaned woman named Georgina. To avoid the lusty clutches of a local pervert, she is forced out of her home. Georgina has the gift of the special sight of psychometry. Like some psychic blood-hound, she has the ability to touch an item and immediately glean information about its history or find a hidden object if she touches items associated with it. Georgie’s ESP is the Chekhov’s gun of this novel as it will be instrumental in the plot’s resolution, what little there is of it.

She heads to a far-away town to seek out a distant cousin in hopes that he will care for her, a relative in need. On the coach ride to her new environs, Georgina meets a dashing red-haired coachman whom she falls for. However, well-meaning fellow passengers warn her that he’s the love-them-and-leave-them type, with different women in every village. Georgie ignores their advice and engages in a secret love affair.

The hero, Charles Collins, supposedly has lots of sex appeal (didn’t see it) but no fortune, as he is the bastard son of a nobleman. He believes he is legitimate, however. Charles is working as a coachman to save money to hire a barrister. He tells Georgina that the relative she’s going to live with is his younger half-brother, his father’s legal heir. He’s convinced there must be some shenanigans afoot. Charles, not his brother, is the true inheritor of the manor and title.

Charles and Georgie get down with each other, and he sweet talks her into promising to search for any information that will prove his claim. Georgie vows to do her best.

Her best is… Well, you’ll see.

So the Lord of a half-brother is also a charismatic hunk (I saw it here) and lives openly with his mistress, who’s naturally contemptuous of Georgina. If Georgie would say the word, he’d gladly throw his courtesan aside to have Georgina instead. But Georgie has her dashing coachman and wouldn’t dream of being unfaithful to her beloved.

No, I’m just joking. Remember, this is a 1970s Playboy Press bodice ripper!

One Hell of a Crazy Scene

Back in her hometown, when some creepy old dude wanted her for his mistress, Georgie’s upstanding morals wouldn’t allow for such dishonor. Now, things are different. Yes, she’s in love with a young, handsome dude, but she’s living with his equally hot and much richer brother…

The best part of Coach to Hell is when Georgina has Charles in her room for a late-night tryst. Then his brother enters her chambers with the same intention, forcing Charles to hide in her wardrobe. Georgina can’t shoo the brother away by being smart enough to say she’s on her period, so while Charles conceals himself in the closet like some teenaged boy hiding from an angry father, Georgie bangs the half-brother in her bed. And the half-brother is so good at it that Georgina forgets everything and moans away in ecstasy, giving our sad-sack hero something extra-special to listen to.

This book is a bodice-ripper, and Charles is our supposed “Alpha” male hero. So does he burst out into the room and kill them both in a blind rage? Nope. Charles stays there, sitting and sulking, while his hated enemy joyously screws the woman he loves, bringing her to orgasmic heights.

This scene was so WTF and made me wish that The Coach to Hell had fully embraced its campy nature and included more juicy bits like this!

After that, I admit I lost all respect for the hero. I certainly didn’t expect him to go all wifebeater on Georgina, but he at least could have punched the lights out of his half-brother. Unfortunately, I can’t root for a cucked hero, so I just read to get to the end of the story. 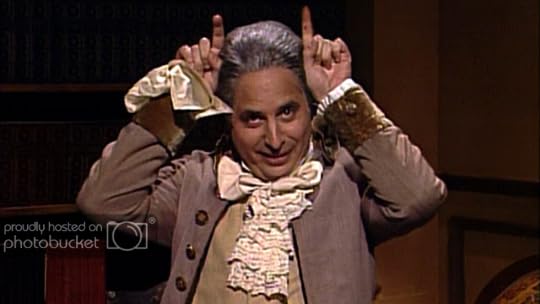 Final Analysis of The Coach to Hell

You didn’t actually think Charles wasn’t the real Lord, did you? Oh no, I gave away the ending! Look, if you’re reading these cheesy romances, you know they’re supposed to end “Happily Ever After,” no matter how discombobulated the path to “Ever After” is.

I do wish I had enjoyed this book more, but Georgina was just too stupid for words. I lost any admiration I’d had for Charles after he was ignominiously crowned with a set of horns. Instead, I rooted for his brother from another mother to get the girl.

In the end, this Rachel Cosgrove-Payes Gothic ‘ripper was a so-so read for me, memorable for all the wrong reasons.