Books like Jo Ann Ferguson’s An Offer of Marriage suffer from being published during a time of change. When Kensington’s Zebra historical romances died, they didn’t go quickly (actually, Zebras are still around, but they’re not the same as they used to be in the 1980s and 1990s). Before their Heartfire and Lovegram lines ended in the late 1990s, the iconic, colorful covers became dull mockeries of the past, with no lush illustrations, just cheaply photo-shopped images of flowers or castles. In many cases, the covers were nothing more than the title and author’s name.

Zebra dumped most of their best authors (some briefly moved on to Dorchester, which had their own problems) and churned out new lines like Zebra Ballad, Splendor, and Precious Gem Historicals, all of which folded quickly. An Offer of Marriage is a romance from his era.

Young Brenwyn Gunnarsson’s family is slaughtered and he vows revenge. He poses as a lowly freeman to deceive the English and aid the Viking invasion. English Lady Cyndra, the daughter of Ealdorman Edgar of Manor Saeburgh, is taken by caerl Brenwyn to wed his master, Thane Morcar of Manor Darburgh.

If you were irritated by that last sentence, be wary of An Offer of Marriage, because those phrases will be repeated ad infinitum. Such is the thrilling dialogue in this book:

“I am Lady Cyndra, the daughter of Ealdorman Edgar of Manor Saeburgh.”

“Ealdorman,” he gasped. “That is the highest rank in England, except for the king.”

“And I was betrothed to Thane Morcar of Manor Darburgh.”

“Morcar? Is he Edgar’s father? You said his father was dead.”

“I thought Morcar was dead.”

“Yes you said that. That Thevkil told you. Thevkil the Strong?”

“How did you come to speak to that Viking chieftain?”

“I spoke with him when I was with Edgar’s father to his court…Edgar’s father’s name was Under-Chieftain Brenwyn Gunnarsson. He was a Jomsviking and captured Manor Darburgh. Part of his prize was me.”

Brenwyn turns the tables on Thane Morcar and takes Cyndra as his own bride. They fall in love and have a child. Cyndra’s father was named Edgar, so she names her son in her father’s memory. Then Cyndra and Brenwyn are separated and…zzz…

Huh? Sorry, was I nodding off again?

Besides the writing, another terrible thing about this book is its title. An Offer of Marriage sounds way too Regency-ish. It should have been My Beloved Enemy (pg. 253) or some similar crap to go with the medieval/Viking theme. Oh well, that was the least of this book’s offenses.

When I read a tepid historical romance published in the 21st century, I shrug it off. The new style isn’t my thing. But when I read a sucky historical written when old-school historicals were in their death throes, it makes me sad.

I used way too many words to describe this book. Simply put, this was dull, dull, dull.

But don’t take my word for it. Let’s ask others what they feel.

Baby, what did you think?

And kitty, how about you?

Puppy, do you agree?

That’s it, a full consensus! All the pics I’ve stolen off the net agree. This book was: 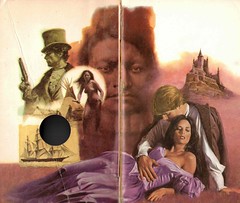